Dog owners, like parents, have to figure out when to hold on and when to let go.

If you follow my other blog, Wind This Way, you know that we’ve recently moved into a large house on nearly 4 acres of land.  We have a long turning driveway that puts us 500+ feet and lots of plant life away from the nearest road.  Our neighbors also have houses set in the middle of their acreage, so we have a nice large “buffer” zone.  We also have two healthy Boxers who love to play together, one of whom is an energetic 9 month old puppy.  What we don’t have (yet) is a fence. So, when wrestling in the house isn’t cutting it, what next?

I wanted my dogs to have a chance to romp, but as a dog trainer, I don’t take letting my loose dogs lightly. So I looked at my dogs’ personalities and training levels:

Dash – Social but also extremely prey driven. We called him the Butcher of Brooktondale because bunnies checked in but didn’t check out of our last fenced in yard.  He has a fair amount of training, but a low amount of proofing. When he gets over-excited, he has a hard time listening.

Delta – Extremely social and somewhat prey driven. She’s had a good bit of training for her young age and she’s also gone through some proofing. She comes “back to earth” fairly easily if you can interrupt her excitement.

I decided that putting Dash on a long line and harness and to let Delta go loose. I loaded up a pocket with treats and had Delta do a couple commands so she knew I was “packing.” Then I opened the door and was rewarded with this: 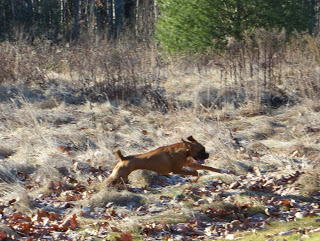 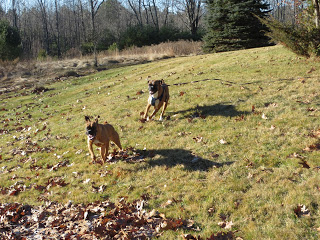 Delta sprinted around in wide circles, putting on the afterburners and leaping through the tall grass of our field. She would circle in to play with Dash, who would happily give chase to the end of his line, then Delta swoop out and take another lap. Dash tugged his leash several times, clearly annoyed that he didn’t have free reign, but he mostly played or sniffed and generally enjoyed himself. A couple of times I spotted an opportunity and had them sit for treats, but mostly I just watched them relish the opportunity to play hard. When I noticed Delta starting to go slower, I called her to me and snapped a shot of my tired, happy puppy:

After I brought them inside and Dash settled in for a contented snooze. It had done them in, as well as doing them good.

One thought on “Calculated Frisk”